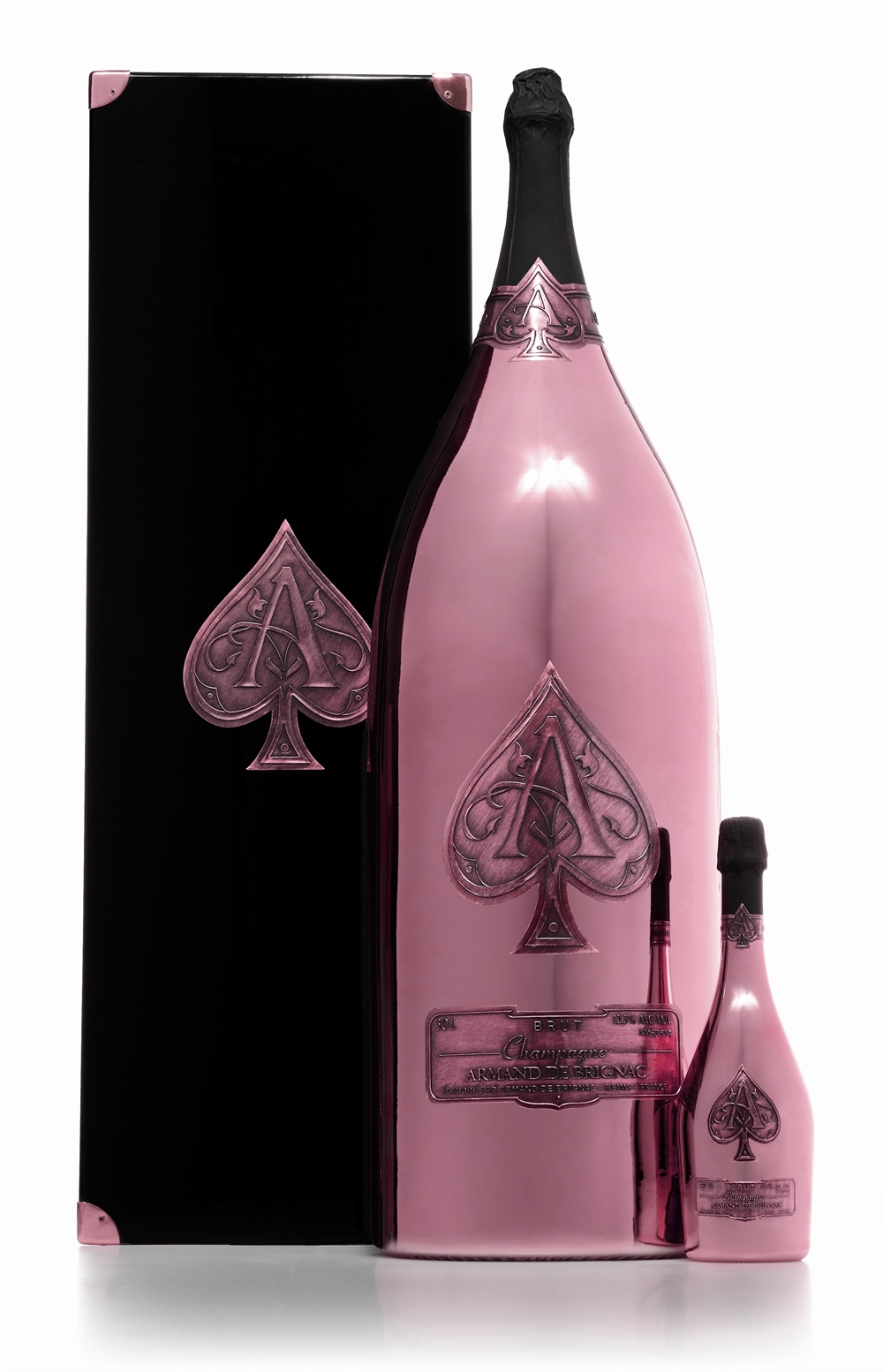 Since Armand de Brignac Champagne was first launched, we have strived to do things distinctively. We are therefore excited to announce the release of our groundbreaking 30-Liter Rosé “Midas” bottle. Equivalent to 40 regular-sized 750ml bottles, weighing 100 pounds (45kg) and measuring over 4 feet high, this colossal bottle is the world’s largest bottle of Rosé Champagne ever produced!

We are further excited to announce that, on 13th December 2013, the first ever Armand de Brignac Rosé Midas will be uncorked at Hakkasan Las Vegas located at MGM Grand Hotel & Casino.

Yvonne Lardner, Global Director of Brand Communications for Armand de Brignac Champagne comments, “From our insistence upon using grapes from the most historic villages of Champagne to our requirement that every step of the process be done by hand, everything about Armand de Brignac is done with an eye for quality and uniqueness. We are proud to be setting new benchmarks with our incredible large-format bottles and thrilled to be unveiling our one-of-a-kind Rosé Midas Champagne experience at Hakkasan Las Vegas.”

Armand de Brignac Champagne, instantly identifiable by the distinctive pewter Ace of Spades insignias on its bottle, exemplifies unmatched winemaking expertise and a true passion for the art of Champagne. A staff of just eight people crafts each bottle of Armand de Brignac by hand at our family house, established in 1763 in Chigny-les-Roses, France. Armand de Brignac counts among its accolades a score of 98 points from world-renowned wine critic José Peñín and a glowing review from UK critic Jancis Robinson. Armand de Brignac’s flagship Brut Gold cuvée was ranked No. 1 by Fine Champagne Magazine in their “100 Best Champagnes for 2010” blind tasting. Armand de Brignac is currently available in more than 110 countries worldwide.

Hakkasan Las Vegas, a restaurant and nightclub complex, offers a unique convergence of modern Cantonese cuisine and an all-encompassing nightlife experience, featuring world-renowned talent such as Tiësto, Calvin Harris, Hardwell, Steve Aoki and many more. The immersive 80,000-square-foot, five-level space offers a variety of environments, including the restaurant, private dining room, Ling Ling Lounge, Ling Ling Club, main nightclub, pavilion and mezzanine, and was recently named one of “America’s Best New Clubs” by Rolling Stone and awarded the title of “No. 1 Nightclub in the World” by Playboy Magazine.

Due to the labour-intensive production methods involved in making Armand de Brignac Champagne and the highly skilled expertise required in creating our large format bottles, only an extremely limited number of Armand de Brignac Rosé 30L Midas bottles will be made available. The Rosé Midas will be listed at Hakkasan Las Vegas for $275,000.

Ja, jag är 25 år gammal eller äldre
We use cookies on our website to give you the most relevant experience by remembering your preferences and repeat visits. By clicking “Accept”, you consent to the use of the cookies.
SettingsAccept
Manage consent

Cookies are a file that is sent from our server and stored in your browser. We use cookies to improve the user experience and to collect anonymous visitor statistics. You can control the use of cookies via settings in your browser, but keep in mind that some services may not work as expected if you block or delete cookies.
Necessary Cookies Alltid aktiverad
Necessary cookies are absolutely essential for the website to function properly. This category only includes cookies that ensures basic functionalities and security features of the website. These cookies do not store any personal information.
SPARA OCH ACCEPTERA